This blog collects news relevant to the design of current and future energy systems, with a focus on economics, Europe and the Netherlands. The views expressed here are my own and not those of CWI Amsterdam (the research institute I am employed at).

I am not an expert on any single technology in energy systems (e.g. transmission, electric vehicles, batteries), but the interconnectedness in our energy systems makes a broader view very important, as well. I come across lots of links because I developed a general interest in this important societal topic during my PhD and thus come across lots of news stories. Sometimes I will give only the link, but if time allows, I'll summarise shortly what I think the most important or interesting bits are.

[This blog ran initially on Posterous, but they sold to Twitter and shut down. I decided to move it into my own domain.]

Recently, there have been interesting contributions to the old and crucial question of what acceptable levels for solar power costs would be.

On the hopeful side, David Keith from Harvard reevaluates his position on this issue. Whereas several years ago he was skeptical about the ability to produce power from solar (unsubsidised) at grid-competitive rates, he now admits that we actually saw a 50% decrease in costs (he is looking mostly at industrial-scale solar, not rooftops I believe), which brings solar power an impressive step closer to becoming a serious part of the enrgy mix.

This happened by gradual improvements in costs structures of existing technology. The below graph illustrates this - but keep in mind that it only shows costs of the panel odules themselves, not all costs of getting them installed (e.g. human labour, inverter etc). Looking at overall costs, costs per installed Watt went from $6 in 2007 to around $3 in 2014. 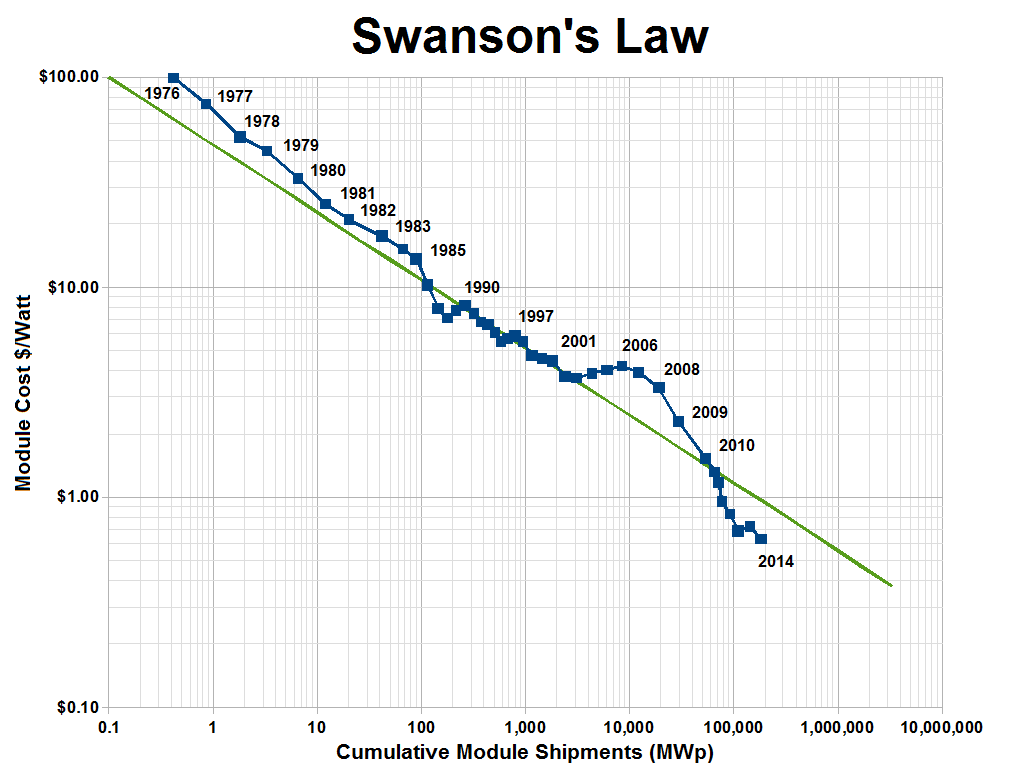 Another cost figure is Dollar per kWh (usually measured as LCOE=costs divided by produced electricity over the full lifetime). Keith argues that unsubsidised, industrial-scale solar PV can be delivered at four cent per kWh in good (sunny) locations (here is an actual deal from 2014 with that price between FirstSolar and Warren Buffett’s Berkshire Hathaway Energy, but I'm not sure subsidies aren't part of this particular price).

Keith argues further that by 2020, in the best locations, we could see costs of two cents per kWh.

Compared to other new sources of supply, this would be the cheapest electricity on the planet.

Not sure how he classifies "new" here. Anyway, here is a more conservative view on cost developments per kWh from Europe (which has less suitable locations): 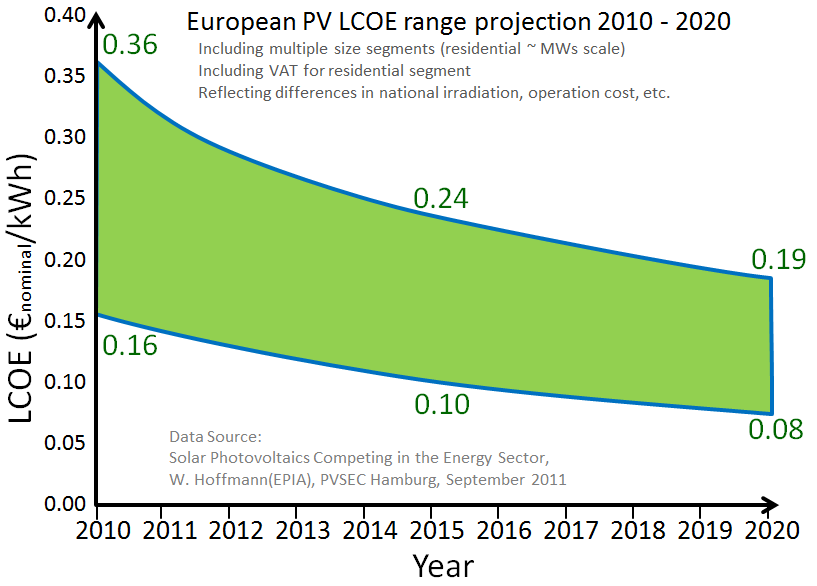 Keith sees a few consequences of falling costs of solar:

1. Wind seems to lose to solar if these trends are any indication for the next years (costs and efficiency for wind power have been quite flat)
2. Prices in power markets will reshape around the availability of cheap solar power (in effect, sunshine), making it hard for coal and nuclear to compete.

Next to location, the big variable in any equation involving solar is the intermittency of sunshine.

David Keith addresses consequences with regard to this, as well. He sees strong cases for gas turbine backup and long-distance electric transmission (from places with good sunshine to places with less). In addition, it might become worthwhile to move intensive electrical demand (e.g. aluminum production) to where power is cheap (where there is sunshine).

Btw, due to its low environmental impact, Keith still sees a role for nuclear power (as many others outside of Europe are recently stepping up to say).

Solar is not cheap enough

The intermittency problem is also appearing in another recent discussion about the costs of solar. People are discussing the "value deflation" effect of solar power (or renewables in general).

This effect simply states that the marginal value of a solar panel decreases with the amount of already existing solar power capacity. It's due to solar power being a price-taker - it accepts the price which the market pays at the very moment when sunlight is being converted into electricity. And if there are more price-takers, the price the market will pay in that sunny moment goes down.

Some studies show that increasing the share of overall solar power by 15% can decrease the money you can earn with them by 50%. A nonlinear deflation effect!

So - whereas today we have arrived at 3$ per installed Watt, which people like David Keith wouldn't have thought doable (within this time frame) and which is turning out to be quite cost-competitive, we might have to drive costs of solar down by much much more in the upcoming decades, should the share of solar increase significantly. A goal of .25$ per installed Watt (decreasing current costs by a factor of 12) would be safe, according to Varun Sivaram and  Shayle Kann, assuming batteries and demand response are not present.

Batteries and demand response might actually be developed further (I have been working on the latter), but they will hardly solve the value deflation problem completely. No one knows by how much, but not by more than 50% probably. And in some locations, there might never be a deployment of such additional technologies, or much less so than in developed countries. A target of .25$ per installed Watt was deliberately chosen by Sivaram and Kann to be a safe bet.

So is that an impossible goal? Certainly with the current technology. Swanson's law (see graph above) will probably run its course soon, unless a technology switch happens. I believe this is similar to semiconductors (see Moore's law), where several major innovations kept the law going longer than people had expected.

Nanotechnology seems to be ripe to deliver such innovations. One example are Perovskites which can lead to cheap, thin & transparent coatings which can deliver electricity from sunlight. They can also very soon be used in hybrid solar cells, providing a stepwise ladder to commmercialisation (and a building block to a smooth continuation of Swanson's law). Also, the human labour costs for installing panels might be reducable by automation (e.g. by advances in robotics).

Only time will tell if such savings are possible. As David Keith's admission shows, it is not easy to get these predictions right.