This page is my "blog".
It's just a place to leave some thoughts and things that are going on. Some will be about software, some about humans and some about both. I'll try not to post about the brand of my new toothbrush unless it's really important :-)
the latest entries:
The Mom test
Der letzte Weynfeldt
Google-free Android on Fairphone, again
Other minds
Risiko
The Why-are-you-here Cafe
Herbstmilch
Mit brennender Geduld
At Home
08 Jan 2009
Group work in universities could be designed a lot better

I am having a rough semester, group-wise. I think that group work at universities is still pretty immature. 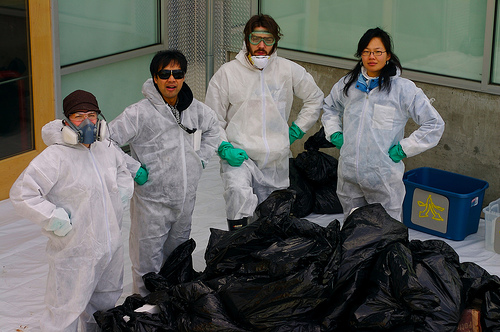 Here at the Vrije Universiteit (like in many universities these days), group work is an important concept. To put students in groups saves the lecturer the hassle of evaluating 30 projects. Instead, (s)he evaluates 10 projects. Then, projects can be more ambiguous. Of course, group work also prepares students for the complex work life, where nowadays collaboration is an important ... and so on.

My point today is that group work also introduces new problems, problems that are not properly dealt with. Most of the times, a group is assembled and you have to work together with some guys you never met before. Yes, this is where the soft skills get developed. But what if one or more group members are clueless and/or lazy? The last thing is often worse and it happened to me in almost all courses this semester. I worked really hard, while others profited and got the mediocre grades that I almost single-handedly achieved. Meanwhile, I couldn't focus on other stuff like exams and also got mediocre grades there. I am pissed, mostly because people can behave like dicks right in front of me and get away with it.

Of course, this also happens in the real world. In fact, I know that it happens all the time. But in the real world, there is often something you can do. You can leave and add your work force to a better group. You can fire someone. People can get different payments because their contribution to the project is different. In the real world, there are potential drawbacks for slackers. Currently, in most courses at universities, there is none. You have to stay in your group. Everyone gets the same grade.

What I am saying is: if you create group work, fine. But if you let the work of individuals be invisible, you create incentives to cheat. If you grade everyone the same, you show that underperforming pays off. If you don't allow people to regroup, you are a Stalinist.

A group needs to be able to react to conflicts in a way that matters.

There are so many tools out there that make online collaboration trackeable. Tell students to use them and monitor them in case of conflicts. Make conflicts visible. Introduce a sensible rating among group members and act if there are disparities. Make it possible for members to leave a group. There is so much to do that would raise the quality of work and the motivation of students that are not trying to get through on the back of others.

Update 12.01.09: In one of the project, one that still goes on, I decided to talk to the supervisors. One normally doesn't want to do this, because it feels like telling on your colleagues. But by this time, I had become so angry *, that I didn't consider my group members colleagues anymore. I have to say that when the supervisors are really monitoring group work (in this case by group meetings and presentations), then they can and sometimes will react properly. In this case, they had also suspected what I was describing. After they questioned the rest of my group about their subject knowledge, they decided to split the group. Maybe that is better for everyone. The supervisors really took time to resolve this and had indeed prior knowledge, albeit coarse, about individual work. If they do good work like this, I do think that supervisors should take a minute at the beginning of a course to mention that they will also keep an eye on individual performance (and there might very well be differing grades) and will react to problems in groups (and not just the "Hippie-way"). This helps the incentive.

By the way, this was in a group of three (where they normally preferred a size of two). Group size is also very important. A group shouldn't be too big. I had one course this semester in a group of five and that just spells disaster in this setting.

* I was angry when I wrote this rant, in fact - so I now reformulated two or three adjectives in the text.

# lastedited 12 Jan 2009
follow comments per RSS
on08 Jan 2009 - 12:18 fromJan
Well put. There's one type worse than the lazy type. It's the "lazy at first and afterwards complain about the results others put together"-type. And I agree completely that the lack of individual assessment of group members shows the laziness and slackness of the line manager (in this case the teacher), which wouldn't be so easy to get away with in the "real world" . I once had the case of having one dull witted but nice group member and one of the lazy-complainer type so I ended up working with two friends from the same class who were interested in my group work and who were of course credited zip for their work. What I always hated was when teachers regrouped people because they felt it was important that people met new people and shouldn't work in groups they knew and where they probably knew they'd get along from previous experiences.
[link]
on15 Jan 2009 - 21:45 fromGabe wwwhttp://gpickard.wordpress.com
I've made the experience of being both motor and millstone of a group. I believe it is - as in so many cases potentially helpfull if people form some sort of aggreement and come to understand what each other's goals (and in this case grade expectations) are -- in beforehand! This also requireas a certain element of maturity. So the complainer-blame-the-other types would not be mended by such a setup. For that, clearly, one needs methods to break up groups. This reminds me of free cooperation (http://www.freie-gesellschaft.de/wiki/Freie_Kooperation , in German), a concept that I studied a bit in my highschool days.
[link]
You are seeing a selection of all entries on this page. See all there are.