This page is my "blog".
It's just a place to leave some thoughts and things that are going on. Some will be about software, some about humans and some about both. I'll try not to post about the brand of my new toothbrush unless it's really important :-)
the latest entries:
The Mom test
Der letzte Weynfeldt
Google-free Android on Fairphone, again
Other minds
Risiko
The Why-are-you-here Cafe
Herbstmilch
Mit brennender Geduld
At Home
13 Oct 2008
Amarok 2 is widgy

I am following the development of Amarok2 since a week. It's near completion, though still a little buggy. The second beta was just released.

I noticed that if you use a software everyday, you build a relationship. I donated some Euros to the Amarok team yesterday and I decided to run the beta despite some crashes since today. I do appreciate a fresh spirit in my music listening. Thanks, Amarok team.

Now. The main concept of the latest KDE 4 software is to have widgets (I especially love Folder Views). So in Amarok, too, you get an area (between media area on the left and playlist on the right) which you design yourself. Well, at least you decide which widgets you want to have.

In this screenshot, you can see that I opted to see the lyrics for the actual track and the Wikipedia entry for the artist: 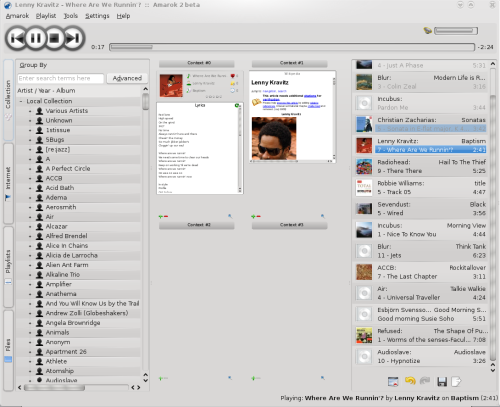 Especially the widget area could use more programming love (You can zoom in, but not in the nicest way yet. Some widgets still crash.). But I must say that with KDE4 I became a real KDE fan. Thanks to Pete for encouraging me to try again.

P.S. The playlist there was assembled randomly. I skipped Robbie Williams.

# lastedited 13 Oct 2008
You are seeing a selection of all entries on this page. See all there are.