This page is my "blog".
It's just a place to leave some thoughts and things that are going on. Some will be about software, some about humans and some about both. I'll try not to post about the brand of my new toothbrush unless it's really important :-)
the latest entries:
The Mom test
Der letzte Weynfeldt
Google-free Android on Fairphone, again
Other minds
Risiko
The Why-are-you-here Cafe
Herbstmilch
Mit brennender Geduld
At Home
17 Mar 2009
The economy, physically

I am currently reading The Origin Of Wealth - a book which tries to explain in what deep explanatory troubles classical equilibrium economics have gotten into during the last two decades.

This simple drawing I made should resemble some of the most basic physical classification of systems and where economic systems belong. The author says that classical economics would want to place an economy in the right branch and therefore never have a model close to reality. 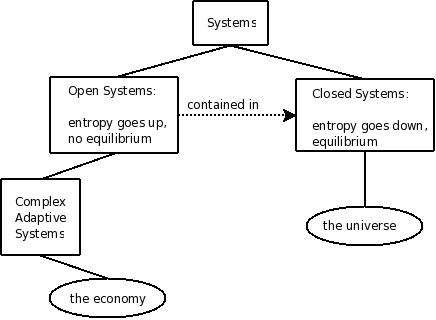 After economics borrowed the notion of an equilibrium from physics (roughly 100 years ago), physics moved on and discovered entropy and the second law of thermodynamics. Chaos and Complexity have now been discussed fundamentally by almost all basic sciences, but seldom in economics.

Later on, the book discusses that in an open system like an economy, the creation of (temporary) order is what we call "wealth creation" and that this happens by evolution-like processes (the best system/solution/product replaces others):

I am interested to see how the author defines a "complex adaptive system" (which is his own term) later on...

# lastedited 12 Aug 2010
You are seeing a selection of all entries on this page. See all there are.